Agriox is agriculture’s answer to oxygen in soil. Likewise, this aerator product saves golf course superintendents, lawn care service providers and others, time, loss of game and money. Most of all, Agriox is an effective alternative to increase soil oxygen. It adjusts oxygen release to meet soil needs. Furthermore, it is environmentally and user friendly.

Agriox is a revolutionary time released aerobic aeration conditioning product for soils. As such, it releases oxygen only when needed.  It provides critical life sustaining oxygen to microorganisms.

In the summer, from June through August, low soil oxygen and black layer are common problems. Agriox is a uniquely effective dispersible powder aerator. It can remedy the conditions that lead to black layer and an anaerobic soil environment. Because this often means soil is compacted and possibly water logged, Agriox is often used in combination with Penterra, the fastest acting soil penetrant. Penterra and Agriox are used together to get water and oxygen moving quickly and deeply throughout the root zone. Check out a previous article: “Soil CPR: Summer Soil Dream Team“ 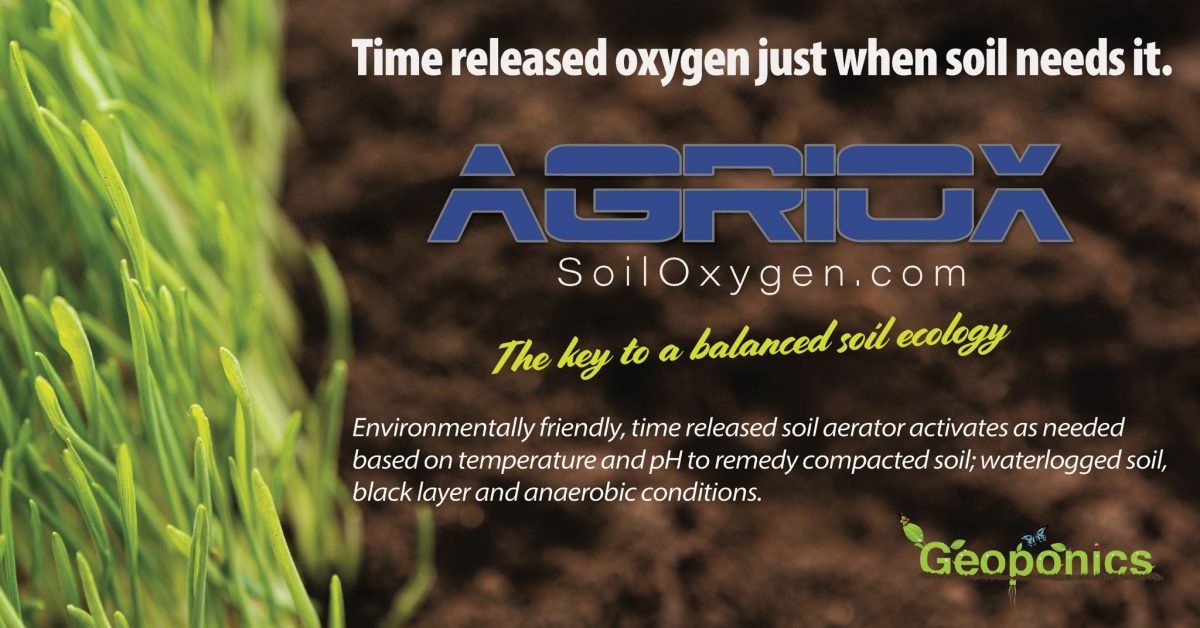 Why Is Oxygen in Soil Important?

Oxygen, for plants, is essential because it makes the process of respiration more efficient. This is known as aerobic respiration. Roots, seeds, and other parts of plants that don’t photosynthesize also need to consume oxygen. Because of this, at least in part, plant roots can “drown” in waterlogged soil.

In addition to respiration, oxygen in soil effects nutrient and water uptake, the redox potential of soil elements and the activity of microorganisms.

What is Redox Potential and How Can Agriox Soil Aerator Help?

Shortly after flooding, for example, the limited supply of oxygen in soil pore spaces is depleted rapidly by roots, microorganisms, and soil reductants.  Therefore, Penterra, the fastest-acting soil penetrant, is used to get that flood water moving. Meanwhile, it is often used in conjunction with Agriox, the liquid aerator that activates only when needed, to increase oxygen rapidly as well as over time.

When water alone is used to get oxygen through the soil profile, it is possible the additional water may cause more harm than good. Likewise, the wrong surfactant, such as one that retains more water in soil, can cause problems. The best soil surfactant in conjunction with Agriox is often Penterra to get water and oxygen moving through the soil.

Conditions where additional soil oxygen can help include soil compaction and an over abundance of organic material, as well as soil high in clay or ash. Thus, Agriox is recommended for these.

How Is Agriox Unique to Other Aeration Products?

Agriox is an efficient, affordable and effective alternative to mechanical and core aeration methods. It is also a very unique formula when compared with liquid aeration products because Agriox is slow release and activates as needed.

So, what makes Agriox particularly effective is that it aerates over time, activating depending on pH and temperature. Thus, Agriox is releasing oxygen when it is most needed. Agriox is not activated when oxygen would be detrimental to the soil profile’s ability to nourish the plant and its roots.

Agriox moves with water and adjusts upon demands, for example, when in soil up to a pH of 11, Agriox will release very slowly. When soil pH is down to a 5.5 or 6, Agriox releases faster.

How Does Agriox Compare to Mechanical Aeration for Increasing Soil Oxygen?

Cultivating or turning soil for it to mix with atmospheric oxygen can be challenging. For many turf grass managers, golf course superintendents and agricultural managers, aerating at the recommended frequencies per season and year is almost impossible. Because, to do so would either ruin crops or destroy the golf course, making it impossible or inconvenient to play and thus lose even more money in lost income.

Additionally, besides avoiding that hassle of mechanical aeration, Agriox can get deep into the soil.

Agriox and Penterra: Better Together, Getting Oxygen Deep into Soil and Root Zone

As stated above, Agriox is particularly effective when combined with Penterra, a soil surfactant and more specifically a soil penetrant to get water moving through the soil.

Together, Agriox and Penterra address compacted soil and get water, nutrients, oxygen moving through the soil and more accessible to the plant. 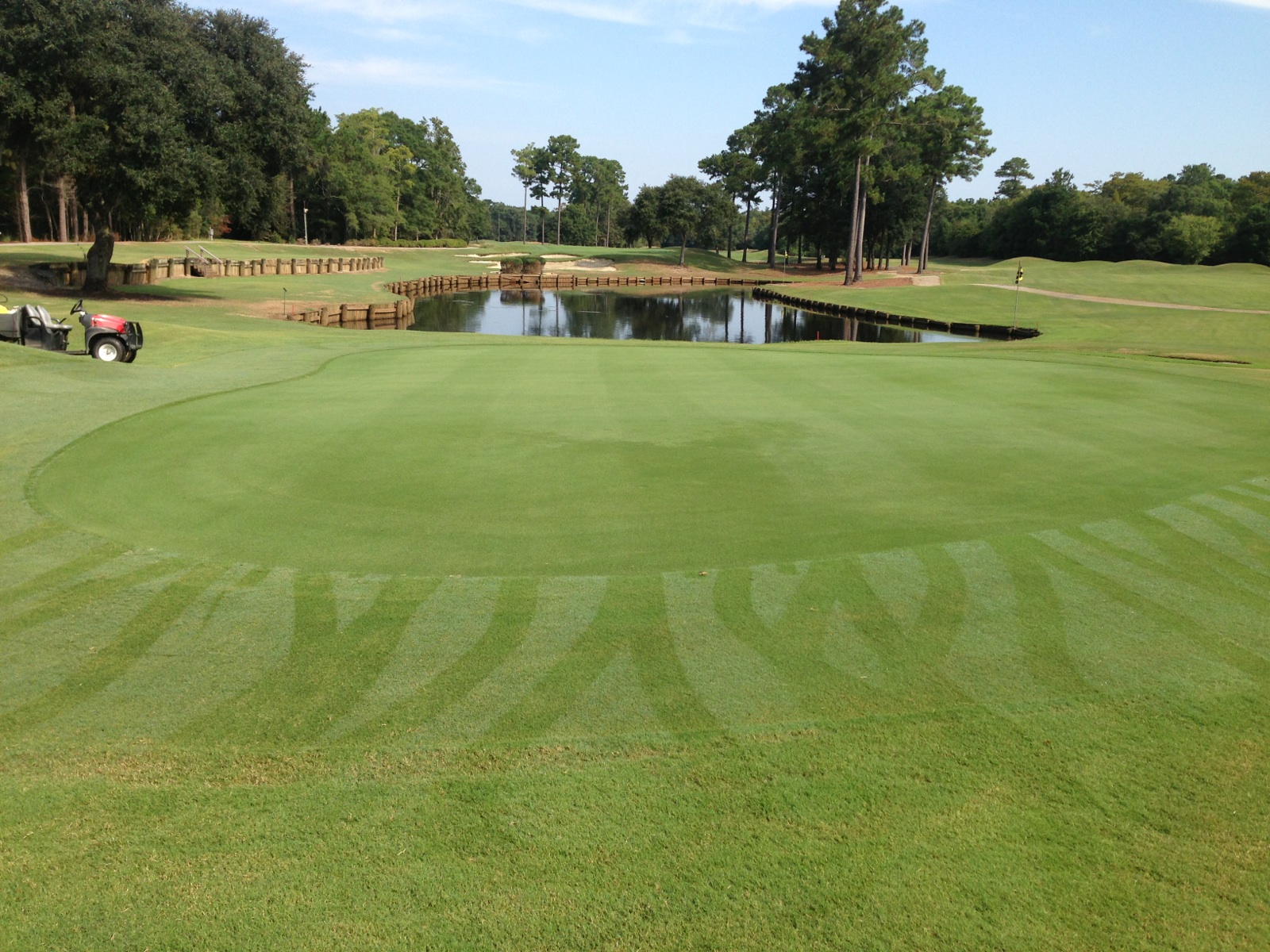 Flood recovery is quick at Aberdeen Country Club in South Carolina with a fast-thinking superintendent, aerobic action with Agriox and the fastest-acting soil penetrant, Penterra.

While core aerifying has many benefits, it also has draw backs, says Dr. Lee Berndt, a professor and senior agronomist.  “Core aerifying can soften turf surfaces, something most superintendents don’t typically strive to do.  And it can be disruptive to golfers both physically and mentally,” he has said. (Read more)

Signs Your Soil Is Compacted and/or You Would Benefit from Agriox Soil Aerator include:

What is Black Layer?

Black layer is an accumulation of metal sulfides in pore spaces of soil. Its presence is an indicator that redox potential is low and that hydrogen sulfide is being released. Hydrogen sulfide is toxic to turfgrass plants, and it is a likely cause of the turf decline associated with black layer. (More from the GCSAA Golf Course Magazine.)

Other Benefits of Agriox Soil Aerator

As Dr. Berndt and other agronomic experts can attest, avoiding black layer is multi-faceted. Agriox makes it much simpler. Agriox creates a healthier soil environment and soil structure to avoid the common anaerobic soil condition that often occurs in summer due to high heat and rain that doesn’t drain. (As we mentioned above, Penterra, the rain drain, works great with Agriox.)

“If soil becomes compacted there is less air-filled pore space, which means a greater percentage of the pore space contains water further restricting the rate of oxygen diffusion. And then, if sulfur, ammonium, or sugar is applied, the redox potential falls ever further. And boom, the black layer happens, or maybe something even worse.  This is why avoiding the application of sulfur and fertilizing with nitrate-based N carriers, which increase redox potential, is a BMP for managing anaerobic soils and the black layer,” Dr. Berndt has said. (link for more) 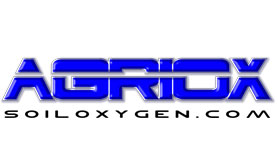 Conditions Related to Black Layer That Can Be Remedied with Agriox Include:

Agriox is high oxygen. So, it doesn’t ship through all methods and isn’t sold online. Call to order today!