Endurant turf paint trampled on the practice of overseed at a South Carolina race track. Preparing for one of the biggest horse race events this fall, the superintendent of Springdale Race Course located in Camden, South Carolina, ditched the idea of overseeding. Instead, knowing the course would be drawing the attention of visitors from around the world at the upcoming Colonial Cup, Endurant turf paint was selected to prepare the course.  This was the first time the course managers opted to paint the race course and Endurant organic turf colorant was the obvious choice.

Springdale Race Course, home of the Carolina Cup and Colonial Cup horse races, is located next door to a golf course. Seeing the effectiveness of the Endurant turf paint used on the golf greens for years finally prompted the change in direction at Springdale from overseed to Endurant turf paint. The benefits of painting with Endurant turf paint versus overseed are numerous, including saving water and time. Endurant turf colorants are used by golf course superintendents, landscape and lawn professionals to make vibrant, natural-looking turfgrass pop with color year round.  As turfgrass approaches winter dormancy in many areas, it’s turf painting time. Golf courses superintendents, landscape managers, sports field operators and home owners alike choose to turn that brown grass to green using Endurant organic turf colorants. Whether dormancy is approaching or a big event nears, shop turf colorants here. 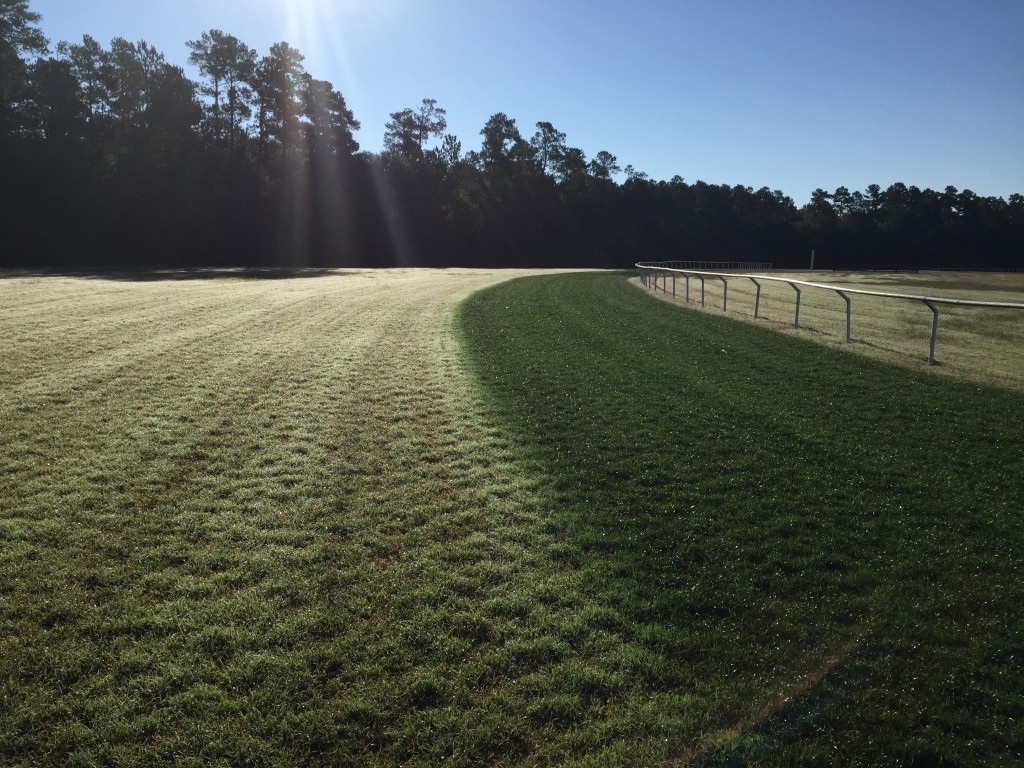 After years of overseeding, Springdale Race Course in Camden, SC chooses Endurant organic turf colorant instead to better prepare for their big fall event, the Colonial Cup, this November.

Springdale also found some unique benefits using Endurant turf paint instead of overseed before their upcoming steeplechase races, where thoroughbred horses will be leaping over obstacles and kicking the green grass up into the air. One problem Springdale Race Course had was a lot of weeds among the bermudagrass. So when overseeding, the weeds would just grow back up through the overseed. The weeds would become difficult to see and even harder to get rid of. An application of Endurant turf paint allowed the weeds to be easily tackled. Most helpful for the horse races is that the green Endurant FW, which is often used on golf fairways, will give the horses a better sight line during the steeplechase races. This advantage in vision due to contrast is a key reason golf course superintendents enjoy using Endurant turf paint for the benefits of their golfers’ sight line as well. Springdale Race Course, located in Camden, S.C., is one of the most well-known steeplechase tracks in the U.S.. Similar courses are all over Ireland, where steeplechasing originated. Endurant turf paint allowed Springdale to leap their turf obstacles much faster than overseeding. The application of Endurant turf paint will easily last through the big event in three weeks. Then, the course will be trampled by horses and even weeds’ roots would stand the test if not tackled with the help of Endurant. The time efficiency of painting the track versus overseed also just made the most sense.

The turfgrass on the race track is mostly Bermuda with some rye grass mixed in, along with the unwanted weeds. Unlike a golf course, the grass is higher and a bit less manicured without an irrigation system. Seeking a great, vibrant green color for an event that draws tens of thousands of fans and worldwide attention, Springdale’s superintendent chose Endurant FW to get the course up to par for all the attention. Endurant PR, with a perennial rye look, was their second favorite in color choices. The Endurant FW provided an easy to apply contrast in color to the two-mile European-style turf course that could not be achieved with overseed. See the full line of Endurant colorants here.