The Quarry of Naples

Geoponics sits down with Superintendent Tim Haskins of The Quarry in North Naples, Florida to discuss the fast results he experienced with the Geganics Program. Geganics gets its name from combining the words organic and Geoponics. The Geganics Program provides sustainable turf fertility with moisture management, nutrients and several other benefits.

Learn about Geoponics products with this one-page product guide to get started.

Geoponics: Tim, can you tell us a bit about The Quarry?

Tim Haskins: The Quarry is nestled in about 830 acres of preserves. We have about 320 acres of lakes out here—the big thing being the 275-acre stone lake, which is kind of our center piece of the property. It was actually a working Quarry back in the day. So we actually have a crane that was left on one of our holes in the back that kind of pays homage to what was here in the past.
We have a great amenities center. We have our own beach. We built our own beach here on that lake. So we actually have a beach club on the other side of our club house, which houses all our tennis facilities, fitness and a restaurant over there. It’s a great amenity for the members that live here. All the members, all the residents that are connected to that lake have boat docks. So, they have the ability to boat out here.

The golf course is designed by Hurdzan-Fry. We’ve hosted the past two years of the ACE Group Classic.

Geoponics: What type of turf does the course have?

A bit about SeaDwarf Seashore Paspalum:
• SeaDwarf® Seashore Paspalum needs low fertilizer, low nitrogen and can be treated for weeds with table salt. This saves time and money and helps the environment by putting much fewer chemicals into the ecosystem.
• Requires up to 50 percent less water than bermudagrass.
• Can be irrigated with recycled water.
• Has much less nitrogen run-off than many other turfgrasses because less nitrogen is used for fertilization.

Geoponics: Has the turf always been this way or was that a change?

Tim: That was from the get-go. The developer looked at it as a great tool for environmental sensibility. The attributes of Paspalum, requiring less water, less fertility really hit home with the theme they wanted to go with by trying to be as sustainable as we could be. So, that was the first step, choosing that turf.

Geoponics: How did you first discover Geoponics?

Tim: Really it was just a cold call. Somebody came in. We sat down. Certainly I liked the products. I liked what the sales representative had to say. He had really good information, great back up. It was really nice because at that time it was a situation where he said, “Ya know, I’m not trying to sell you anything today, but let’s try some products out here.”
I’ve got a lot of products out here that I try and I just never got to see the results that I’ve seen with Geoponics products.

Geoponics: When you learned about Geoponics products, given the type of turf you are using, did you think it was a good fit?

Tim: It wasn’t really about the turf. It was more about the soil and what was here before we put the turf on it. Because having been a quarry and sort of abandoned land, the soil really wasn’t sweetened so to speak. So, you know, we struggled for the first couple years with a lot of moisture management issues, disease issues. Paspalum is famous for disease pressure. So, it was more about how we can better the golf course as a whole, not just the turf. Obviously, at the end of the day, the turf benefits from it, but unless you have a good soil structure and you’re doing everything you need to do under the ground versus on top of the ground, you’re never going to win. 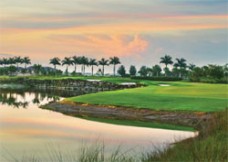 The Quarry of Naples

Geoponics: You said Paspalum is susceptible to disease, what are some of the diseases you’ve had to deal with?

Tim: For the first couple of years dollar spot was really bad. I worked really closely with the Geoponics rep. Paspalum, because of the density of the turf, really holds a lot of moisture. What was happening was we just couldn’t get that moisture to flush through and being able to work with Geoponics gave me the ability to flush it down so nothing was sitting up on top.

The other real big disease I have is Rhizoctonia (also called brown patch) and we’re still working on that one. Moisture management is a big part of everything.
Typically, it’s yellow rings. You start to see thinning of the turf. If you don’t catch it fast enough, obviously death to the turf.
Sometimes we get these wet, cloudy days with high humidity, high temperatures, you know, you’re just praying for sunlight. Anything we can do to alleviate those conditions and strengthen the turf, that’s what we’re trying to do.

Geoponics: You’re now using the Geganics Program on your fairways, right? As a superintendent, can you share with us what changes took place?

Tim: Again, I was a little leery at first about the whole program. When you’re sitting here talking to someone, it makes sense, but until you actually get out in the field and see it work. I can tell you that after spraying that I was on the phone going “Wow. I’ve never seen anything like that.”

The program, with the moisture management in there, I’ve seen less peaks and valleys with hot spots and that sort of thing. There are two products that I change, Penterra and HydraHawk. When it’s the summer and we’ve got heavy rains, I’ll stay with the Penterra to push water through. Versus, say in the winter time, when we’re in kind of dry conditions, I’m using HydraHawk to actually hold more moisture in there. So, it’s nice to have that flexibility, but the fertilizer part of it. I’ve used a lot of different products.
Paspalum is famous for its dark green color. I mean it looks like you’ve overseeded out here in the winter time and I’ve never seen too many products have an affect on color and this product did. It’s noticeable within an hour or two. My members see a noticeable change.
I’m in a much better spot this year from last year in terms of my color, my density, my moisture management.
When I do have situations where an irrigation head doesn’t come on and we don’t notice it right away—because really until it starts to brown out you really don’t know. It’s quicker to recover than it normally would be. So a lot of pluses with the Geganics program.
We’re getting three or four weeks out of the longevity of the color, which is fantastic. Last year, we actually used a pigment on the fairways just to add a little bit of color. We won’t have to use that this year because of the program. There’s no reason for it. 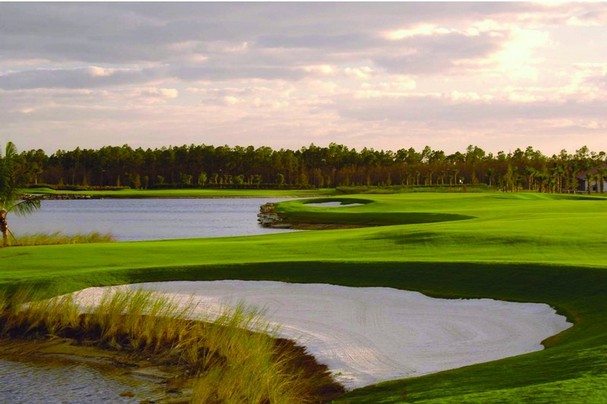 The Quarry won’t need to spray pigment after using the Geoponics Geganics Program, which gets its name from the words “organic” and “geoponics”.

Geoponics: It seems like you’re very pleased with the Geganics Program. How do you feel about the service you’re receiving from Geoponics?

Tim: The service has been great. From day one, again, I’m not a big fan of cold calls, but for that representative to come in and give me the information that I needed, for me it’s nice. He’s available almost 24/7. There’s not a time where I’ve picked up the phone or shot an email or a text and haven’t gotten some kind of a response. Sometimes just stopping by. It’s been fantastic, just the information, the knowledge that the representative has is key when you’re out there looking at a problem. It’s not a situation where the representative will just spout out something if he doesn’t know. He’s very honest. He’ll say “give me a day let me research this. Let me find out because I’m not 100 percent sure. I know I’ve got a product for you, but I’m just not sure which one.” So, it’s not your typical “I’m just trying to sell you something.”
They’re more interested in making the product work to everyone’s advantage than just selling a product.

Geoponics:Anything I didn’t ask that you think might help other superintendents and turf managers in addressing their challenges or understanding this program?

Tim: Every golf course is different. Microclimates are really different from hole one to hole three. It’s just the way it is.
I think if superintendents are really looking into moisture management and the new sustainability issues that are out there with the issues we have with water restrictions it’s only going to get worse. Superintendents really have to start planning now instead of later and these products will work. There are tons of products out there. For me though, these products really work. I haven’t seen the results with other products that I’ve seen with this. So, it’s highly recommended. I don’t see me getting off it anytime soon. It’s not to say I won’t try other things to see if they may work, but why mess with something that works?
Sustainability and water management are just going to be huge and it’s not starting next year. It started two years ago so we have to be proactive and get on the proverbial band wagon if you may.